Shop - 83 MINUTES : The Doctor, the Damage, and the Shocking Death of Michael Jackson 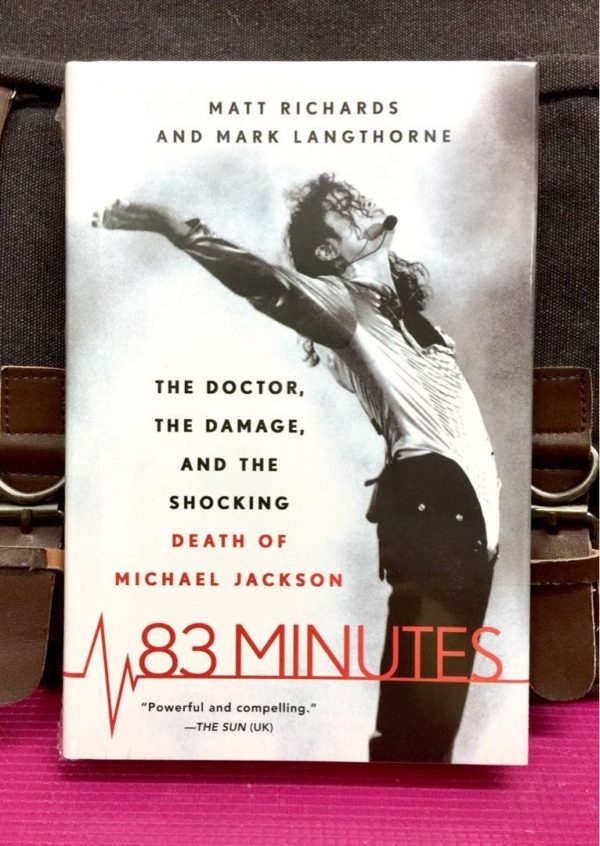 To Pixar and Beyond : My Unlikely Journey with Steve Jobs to Make Entertainment History

A definitive look at Michael Jackson’s final minutes, revealing for the first time the shocking details behind the tragic death of one of the world’s biggest pop stars.

On June 25th, 2009, the world was rocked by the tragic news that Michael Jackson―the biggest and most influential music icon since Elvis Presley―had died.

He was only 50 years old when paramedics pronounced him dead on arrival at a Los Angeles hospital.

For weeks after his death, speculation and rumor abounded concerning the drugs in Jackson’s system and the role Conrad Murray, the singer’s personal physician, had played in the his death.

In 2011, Murray was tried and convicted of involuntary manslaughter, for which he served two years in prison.

Now, for the first time, readers have access to a comprehensive and truly horrifying account of the crucial moments leading up to Jackson’s demise.

Drawing on court documents and testimonials, 83 Minutes presents a multi-perspective tracking of every individual involved and the part they played as the tragedy unfolded, examining forensically the mystery of the 83 minutes that elapsed from the moment Dr. Murray suggested he found Jackson not breathing to the moment the singers’ lifeless body was wheeled into hospital.

Evenhanded and unbiased, Matt Richards and Mark Langthorne’s account is rich with detail, including the specific cocktail of drugs employed in an attempt to keep Jackson alive and the harrowing conditions in which the troubled genius’s life ended.

Included as well is the story of the legal struggle for control of Jackson’s assets that followed his death where Richards and Langthorne report that “the combined earnings of Jay Z, Taylor Swift, and Kanye West since Michael Jackson died come nowhere near the revenues Jackson has earned for his estate after his death.”

Written with documentary flair, this powerful and compelling book is already emerging as the definitive account of one of the darkest hours in music history.

This book begins with a basic biography of Michael Jackson. If you are a big fan, you will probably know everything recounted in the first chapters.

However, for readers with less background information, this helps set the scene and explain about how Jackson became so reliant on painkillers and prescription medication, which culminated in his untimely death at the age of just fifty.

At the time of his death, it is no exaggeration to say that Michael Jackson was literally drowning in debt.

Holed up in a house rented for him by the company who had signed him up to do a series of concerts in London’s O2 Arena, you cannot help but feel terribly sad about the unfolding tragedy, which you could almost feel coming even as a spectator.

Beset by lawsuits, a constant target for the press and badly advised, he was so desperate to make money that he ended up agreeing to perform concerts he was obviously not mentally, or physically, well enough to cope with.

When the London concerts were delayed, his promoters tried ‘tough love,’ (or ‘threats’) to try to force him into coming to rehearsals.

Meanwhile, his personal physician, Dr Conrad Murray was also under pressure to get Jackson to perform. It was a dangerous combination of a financially beleaguered Michael Jackson feeling under pressure – having signed to do ten shows, he never noticed that the company could increase this to further shows, and, when tickets started selling, they did so, causing Jackson to panic – and a doctor who was also financially embarrassed and reliant on the money he could make by going on tour with the singer to avoid ruin.

So desperate was everyone in this scenario, that really nobody seemed to consider Jackson’s obviously bizarre and unstable behaviour and his damaging reliance on surgery and medicine.

Some raised concerns, such as his make-up artist, who felt she was not listened to when she told his management about how cold he felt, how he shook and shivered and failed to eat properly; losing weight and yet about to embark on a gruelling series of shows.

The drug which, eventually killed Jackson, Propofol, is usually administered by an anaesthetist in hospital.

Murray was a cardiologist who failed to give Jackson considered advice, failed to protect him and gave in to his demands for drugs which he should not have received because it was in his interests that Jackson did what the promoters were demanding.

This takes you through the details of Michael Jackson’s final days, the hours leading up to his death and the court case against Conrad Murray.

The room Jackson died in was so full of medical paraphernalia, and he was so underweight, that paramedics thought he was a hospice patient when they first saw him.

The whole book is shocking, saddening and tragic. At times difficult to read but, like all of Michael Jackson’s life, riveting.

An accident, a murder, a surprise can happen in an instant that can seem like a lifetime. It doesn’t take very long — or does it?

The odd thing about time is that it’s shapeable, as you’ll see in the new book “83 Minutes: The Doctor, the Damage, and the Shocking Death of Michael Jackson” (Thomas Dunne Books $27.99) by Matt Richards and Mark Langthorne.

On June 25, 2009, when the 911 call came into the Ronald Reagan UCLA Medical Center in Los Angeles, medical staff had no idea they were in the middle of pop culture history.

The emergency operator and the paramedics he dispatched didn’t know the identity of the man they were asked to help, but they learned soon enough that their patient was Michael Jackson.

For Jackson, it had been a long, rough road to that moment.

Throughout his life, he’d survived loneliness, physical abuse, estrangement from family, accidents and scandals. Outwardly, he was a survivor, driven, a perfectionist. Behind closed doors, though, there was something more sinister.

In the days following the making of a commercial in which Jackson so famously received scalp burns, he was understandably in pain.

Later, he complained of insomnia, and he visited several medical providers for more, different prescriptions. He even asked for help from the doctor his children had been seeing for their allergies.

Whether Murray was officially hired to be the personal physician for Jackson’s comeback tour is a matter of opinion, but the authors say that Murray needed money, and assuming Jackson’s care was his chosen method.

That included giving the singer drugs which allowed Jackson to sleep but which fueled his addiction. It didn’t take long before Jackson needed more powerful drugs, which Murray procured in large quantities.

It’s rare for me to like a book before I even get to the end of page one, but that’s what happened with “83 Minutes.” This is an easy book to dive into.

Starting with what became a crime scene, authors Matt Richards and Mark Langthorne then take us back 50 years to show how Michael Jackson’s death seemed to be decades in the making.

To rehash Jackson’s biography may seem redundant — haven’t there been enough MJ books? — but it’s actually a fascinating scene-setter for the re-creation of the dramatic events of seven years ago.

Richards and Langthorne go on to imagine what may have happened, based on what’s known. Was Michael Jackson murdered — and if so, by whom?

Their hypotheses are intriguing, especially in light of the aftermath of Jackson’s death, his will(s), and the legacy he left.

They say you’ll always remember where you were when you hear of certain tragedies, and “83 Minutes” takes you there again.

For fans, definitely, as well as students of pop culture and true crime aficionados, immersion in this book won’t take long.

In this tiresome account, Richards and Langthorne provide the already well-known details of Jackson’s dysfunctional family, his alleged pedophilia, and his descent into drug addiction following the burns he suffered during the filming of a Pepsi commercial.

Richards and Langthorne attest that January 27, 1984, was the beginning of the end for Jackson, as he grew more and more dependent on narcotics to ease his pain.

After Jackson meets Conrad Murray in 2006, Murray assumes the mantle of the King of Pop’s personal physician, and their lives are intertwined forever.

The authors ramble on needlessly about Murray’s native country of Grenada in addition to pointing out that the debt-ridden Murray was just as much in need of Jackson as Jackson was of easy access to drugs.

Sprinkling their allegedly objective chronicle with judgments about “bizarre” nature of the “tragedy,” they conclude that Murray was negligent in his care for Jackson and speculate against all evidence that the singer might still be alive if Murray had practiced good medicine.

In the end, the authors succeed in illustrating little more than what readers most likely already know.

About the Author
Matt Richards is an award-winning film director, television producer and screenwriter who has written and directed numerous documentaries and series in the UK and the U.S.

Mark Langthorne is CEO of Roland Mouret and has previously worked in the music industry with such stars as Kanye West, Marc Almond and Annie Lennox.

Be the first to review “83 MINUTES : The Doctor, the Damage, and the Shocking Death of Michael Jackson” Cancel reply